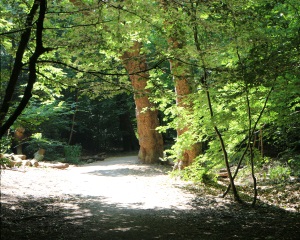 This Summary Botanical Report covers changes observed in the floras of each of the four coppices in Queen's Wood over the last three years. Each coppice is discussed in turn, starting with the earliest, Coppice P, which was cut in the winter of 2008/2009. Details of the early years of this Coppice can be found in Bevan (2011).

This early coppice has matured over seven full seasons and has now stopped recruiting any new plants. The last two additions were recorded in 2014 - Hogweed Heracleum sphondylium, and Creeping Buttercup Ranunculus repens. Both these widespread plants were found at the edge of the perimeter path. The centre of the coppice has now closed over and is impenetrable. Prior to coppicing, there were just 39 species of flowering plant present. During the seven years after the coppice was cut, a further 156 species were recorded, mostly in the first three years. They included a number of London rarities like the tiny Blinks Montia fontana, the ancient woodland specialists Slender St. John's-wort Hypericum pulchrum and Square-stalked St. John's-wort H. tetrapterum, and an unusually vigorous garden cultivar of Water Avens Geum urbanum "Leonard's variety" that must have escaped from a local garden. A very puzzling large-leaved Persicaria was finally determined at the Natural History Museum as P. senegalensis from tropical Africa. It was a new record for London.

Today, little light penetrates to the woodland floor in the centre of the coppice and so a smaller range of plants can survive. Nevertheless, the coppice still supports around

70 species - nearly twice as many as before the coppice was cut, and many others survive in the seed-bank, ready to germinate when conditions are more favourable.

This large coppice was cut in the winter of 2012/2013 and has three full seasons to develop. During this period the coppice has supported more than 80 species including a number of rarities. Two pear trees were present from before the coppice was cut, but their true identities remained enigmatic, as they had never been seen in flower due to the dense shade of this part of the Wood. One of the two trees blew down in a gale early in 2013 but remained very much alive, although growing horizontally. The other tree remained upright but leans at an angle of around thirty degrees from the vertical. Both tree flowered well in the spring of 2015 and again in 2016. They also produced numerous small, circular black fruit - quite unlike the large, pear-shaped fruit of the culinary pear tree. Both trees are very spiny at the base of the lower branches. These would appear to be the native wild pear trees Pyrus pyraster, believed by the late Oliver Rackham to be "one of the rarest British plants". Rackham (2003). I know of only one other comparable tree in north London - a much smaller tree on Hampstead Heath. There is a 1958 record of Wild Pear from Queen's Wood - possibly the same trees.

The discovery of a young seedling Fuchsia in this coppice in 2013 was another surprise. Fuchsias rarely produce much fertile seed in the London area, and this was the first time I had come across such a plant. We had to wait until 2014 before it produces some flowers - disclosing it to be a form of F, magellanica.

Seven different Willowherbs were noted in the coppice, including the Pale Willowherb Epilobium roseum, which is very local in London. Finally, Tutsan Hypericum androsaemum appeared in 2014 - an attractive St. John's-wort that has now appeared in all the coppices except Coppice K (which is probably too dry for it). Oliver Rackham noted it in Coppice P in 2010 and suggested that it had germinated from buried seed. However, it is also widely grown in gardens, and Kent (1975) believed that most of our London woodland Tutsan are all now garden escapes. I have recently recorded it on the Parkland Walk - where it is certainly an escape.

This large coppice, which includes marshy ground close to the extensive back gardens belonging to properties on Muswell Hill Road, was cut in the winter of 2013/2014. The varied terrain has provided habitats for a greater range of plants than have been found in the adjacent Coppice U. Although only two years old, it has already provided homes to more than 90 species, and is likely to continue recruiting more over the next few years. Among the most interesting discoveries was a small colony of the tiny sedge known as Bristle Club-rush Isolepis setacea. This very rare gem is a seed-bank specialist, appearing when conditions are to its liking, and then "disappearing" back into the seed-bank. It appeared in Coppice K back in 1992, and I am looking forward to its possible reappearance there later this year (see below). A small population of Meadowsweet Filipendula ulmaria appeared in 2015, when its profuse white frothy

flowers were much appreciated. This is a plant of marshy ground that is fast declining in London where little suitable habitat survives. It is another species that forms a persistent seed-bank. It appears to be new to the Wood, but may have been overlooked in the past. Another attractive native plant, not seen in the Wood for many years, is the Yellow Iris Iris pseudacorus. This was noted by Latimer (1984) in compartment W in 1984, and "resurfaced" in 2015 on the boundary between compartments W and V. It is not known to provide a seed-bank and may have persisted as a small vegetative fragment for more than thirty years! Hopefully it will flower this year or next.

The proximity of large gardens along the western boundary of the Wood has allowed a range of ornamental exotics to escape into the coppice. One of these, found on March 23rd 2014 on the edge of the drainage ditch, Pinnate Coralroot Cardamine heptaphylla, has only been recorded as an escape in Britain on only three occasions since 1950 and thus has a claim to be our scarcest introduction. Sadly, it did not persist. Two more unexpected exotics, much beloved by garden designers, became establishes in 2015 - the elegant grass Pheasant's-tail Anemanthele lessoniana, and the beautiful Whit-stemmed Bramble Rubus cockburnianus. This coppice is fast becoming a true botanical garden!

Latimer, W. 1984. Woodland Contrasts. Wildwood or City Park. Highgate and Queen's Woods - a survey of their Biology and Management. The London Wildlife Trust.

This most recent coppice is of particular interest as it was previously cut back in February 1992, the first coppice to be cut in the Wood for more than a hundred years. In 1991 compartment K supported just 16 species. By the end of the first year after the coppice was cut (October 1992), this had grown to 69 species.

In 2014, 27 species were recorded before the coppice was cut in the winter of 2014/2015. This higher total was a direct consequence of the earlier (1992) coppice and its lasting effect on the vegetation. By October 2015 a total of 56 species had been recorded. This slightly lower total than in 1992 is likely to result from the scattering of a thick layer of wood chippings following the most recent coppice. In the 1992 coppice, a dead-hedge was constructed around the perimeter and far fewer wood chippings were scattered. As the current wood chippings break down, more wild flowers are likely to appear. Many of the plants appearing in 2015 are similar to those seen in 1992, but there have been some welcome additions including Wall Lettuce Mycelis muralis and Sticky Groundsel Senecio viscosus. The latter is likely to have germinated from buried seed, but the Wall Lettuce is more likely to have come from wind-dispersed seed from plants growing elsewhere in the Wood (where it is now widespread). This year I am hoping to re-find the rare Bristle Club-rush Isolepis setacea, which appeared here in 1992 and is known to survive as buried seed (see comments above about Coppice W/V).

These four coppices continue to evolve and their floras continue to develop and produce surprises. I am looking forward monitoring them into the future.

Copies of more detailed recent surveys by David of coppiced areas including lists of species identified are available on request – email info@fqw.org.uk